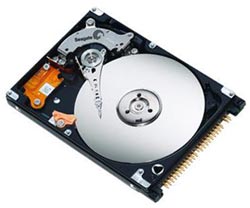 World’s number one disk maker Seagate on Monday released a 12-gigabyte drive compressed into a 1-inch form factor. This could be possible thanks to Seagate’s perpendicular recording technology.

Perpendicular recording stands data bits on end on the disc, rather than flat to the surface as with existing longitudinal recording, to deliver new levels of hard drive data density and capacity. The new data orientation also enhances drive performance without increasing spin speed by allowing more bits to pass under the drive head in the same amount of time. The perpendicular recording performance boost comes without increases in power consumption or heat generation – crucial as remote users look to work longer between battery charges and system builders seek to pack more performance in smaller notebooks. Perpendicular recording also improves drive reliability by enhancing data resistance to thermal decay.

The new ST1.3 drive doubles the capacity of Seagate’s current 1-inch drive, while reducing its footprint by 23 percent and utilizing 30 percent less power. Seagate is targeting the drive at the mobile phone market, which has been uniting with digital media to provide users audio and video capabilities while on the move. The ST1.3 is expected to begin shipping in the Q3 of 2006.