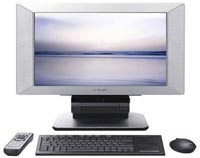 Created keeping entertainment in mind, the VA1 is equipped with a Sony X-black LCD screen.

The computer also comes with a TV tuner that allows you to watch analogue or digital TV that lets you record up to four hours of TV on the systems 250GB hard drive.

Those who are interested in sharing their recordings can do so via the in-built DVD Rewriter.

Rather than opting to do the Media Center element itself, the VA1 comes with the latest version of Microsoft Windows XP Media Centre Edition and combines this with a Pentium D Processor and a 128MB graphics chip.

To complete the home entertainment offering, Sony is packing a wireless keyboard and mouse in the package.