Hardcore Computer brings out Reactor, liquid submerged PC out of the closet 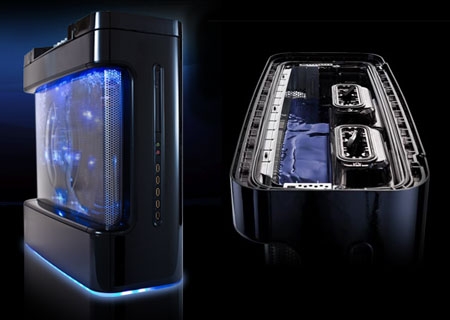 Presenting a cool technology in the literal sense, Hardcore Computer has announced its Reactor PC with the first ever liquid submersion cooling technology for its ‘super-computer’.

Yes that means, all the components, graphics cards, hard drives, everything is submerged!

“Based on market research and early adopter feedback, we’re certain that anyone that requires or demands a system with fast boot and application loads, reliability, cool and quiet operation and over-the-top benchmarks will appreciate the innovations that Hardcore Computer put into Reactor,” said Al Berning, CEO, Hardcore Computer. “We have taken a quantum leap in computing technology by offering features never before seen in a desktop system.”

Reactor has been developed especially to keep a constant cool temperature of graphic cards and avoid heating during gaming and other operations that tend to raise the system’s temperature. It claims to enhance the performance of graphics cards and can cool upto 3 NVIDIA graphics cards “down to unprecedented low temperatures, even at maximum load” for optimum performance. The coolant used in Reactor is dielectric liquid Core Coolant.

Since Reactor is commercially out for sale, it will be really cool to have a PC like that looks more out of a scientist’s labs.