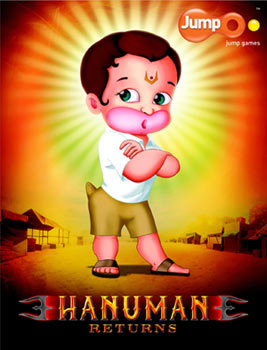 Yesterday, Jump Games, a publisher and developer of mobile games in India and Percept Pictures Company organized an event in Mumbai to announce their association regarding a series of mobile games based on Percept’s upcoming animated movie ‘Hanuman Returns.’

Jump Games has signed a two-year exclusive worldwide contract with Percept Picture for the creation and distribution of Hanuman Returns mobile games.

The first game itself is named “Hanuman Returns”. Mobile gamers will see Hanuman in his human avatar form who is reborn on earth with the blessings of Lord Brahma.

Fast-paced and packed with smashing animation, the game takes the player on Hanuman’s exotic journey across jungles, outer space and far-fetched cities. Hanuman’s mission in the game is to rid the world of evil forces of Guru Shukracharya and Rahuketu. Zipping past wacky obstacles like meteors and demons, Hanuman’s character is shown to brave enemies with his mighty weapon ‘The Gadda’.

Salil Bhargava, CEO, Jump Games spoke on this occasion saying, ““Hanuman Returns is a brilliant game that will definitely appeal to audiences globally. This was a novel initiative for us and we’ve created a game that rightfully recreates the experience of the animated film Hanuman Returns on to the mobile platform. It’s been a great association with Percept Pictures and we are in the process of creating a series of games based on the animated film in coming months. The games series will definitely be something to watch out for.”

The event was one that was filled with color, non-stop entertainment and fun. The entire room was transformed and looked much like a scene straight out of Indian mythology complete with bells, realistic looking sets and yes, the characters from Hanuman Returns as well.

All of the characters including Hanuman’s parents, his friends Munni, Minku and Daddu and his team of supporters namely Narad Muni, Lord Brahma and Lord Vishnu made appearances. Not only that; the evil ones namely Rahu-Ketu, the One Eyed Man, Aghori and Guru Shukracharya also showed up. Each of them looked so close to their character as their make-up, clothes and behavior were just excellent, as you can see from the pictures. 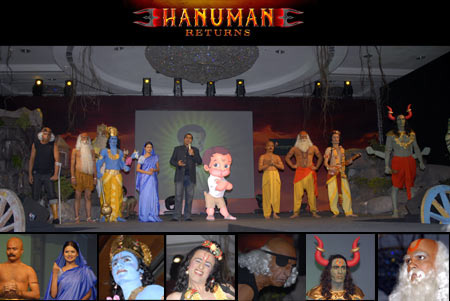 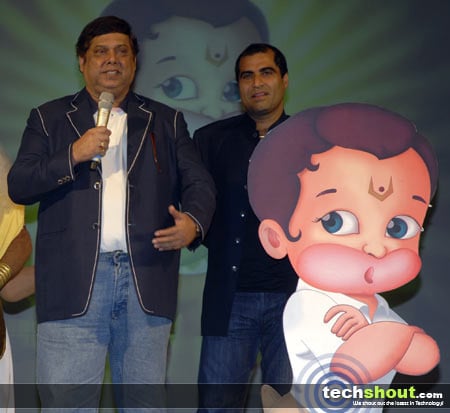 Speaking about the association, Preet Bedi, CEO, Percept Picture Company, says, “Hanuman was a movie that achieved dizzying heights of success; and with Hanuman Returns Percept Picture Company vies at delighting audiences furthermore. Hanuman has the potential to be a globally recognized brand and thus we intend to release Hanuman not only on a national scale but also in various international languages to ensure everyone gets an opportunity to view this visual treat. We’ve had a great association with Jump Games in developing a fun, casual game that adds a whole new dimension to the movie. Let’s say you can now access Hanuman right on to your mobile phones.”

The movie Hanuman Returns is scheduled for release in the latter part of December 2007, while the mobile game will be released two weeks before.

Jump Games is also planning to launch a contest around the mobile game Hanuman Returns. Besides that, this game will also be made available to consumers via Game Kiosks placed at various locations across India.