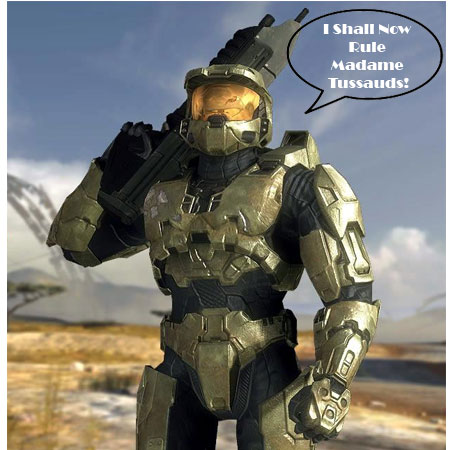 Who doesn’t know Madame Tussauds? To be immortalized in that highly renowned wax museum is an honor in itself. From well-known actors to politicians to sport stars, all have found a place there. But this time around, someone truly special has been enshrined at Madame Tussauds Las Vegas. We all want to be as powerful as him, but alas none can!

In the first time of its 250-year old history, Madame Tussauds Las Vegas is going to have a video game character in it. Halo’s Master Chief is the lucky character that’s going to not only step into the museum but perhaps step into history too with this marvelous accomplishment.

Speaking on the occasion, Wentz said, “For me, the launch of Halo 3 will be the entertainment event of the year. It will be as big as or bigger than any of the summer’s movie blockbusters.” Adding, “Master Chief is as much of a hero today as characters like Spiderman, Frodo and Luke Skywalker were for previous generations.”

The life-sized Master Chief had been developed at the Madame Tussauds Studios in London specifically for the Las Vegas attraction. He stands an unbelievable 7.2-inch tall and weighs around 275 lbs. It took the painstaking hard work of 10 studio artists, who worked for about 892 man-hours to create this mighty soldier. Total man-hours included 687 hours for sculpting, 168 hours for molding, and 37 hours for painting. More than 1,000 pounds of clay have gone into molding Master Chief.

“Master Chief is the first computer gaming personality immortalized by Madame Tussauds in our 250 year history — recognizing the ‘celebrity’ of the Halo series that we had to capture”, maintained Adrian Jones, General Manager for Madame Tussauds Las Vegas.

Visitors to Madame Tussauds Las Vegas will get a chance to see the gigantic figure much before the game’s release, which is slated to take place on September 25, 2007. Placed at the attraction’s front entrance area, providing guests with a “disarming” greeting at the door; you can also click photos with Master Chief.

No doubts that Master Chief is surely a highly loved video game character. But what about others such as Marcus, Augustus Cole, Lara Croft, Snake, Mario? Will they also get a place in there some day? Hope so!