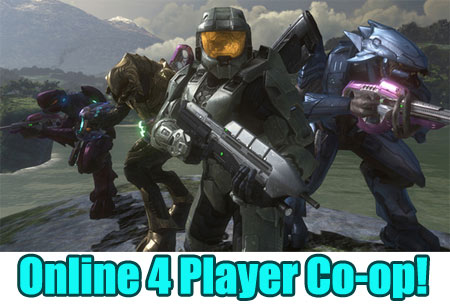 Yesterday, in a post titled ‘The Tru7h About Co-Op in Halo 3’, Bungie announced that Halo 3 will include an online co-operative style of gameplay not just for two players but also for four players in the campaign mode.

Bungie’s Luke Smith said, “So you were probably wondering why we didn’t want to commit to two player co-op online over Xbox LIVE. We certainly got plenty of mail asking, no, demanding that we make it happen, Of course, we were working on it, but we were also working on something better. Not two player co-op. Not three-player co-op, but up to four player co-op. Online. On Xbox LIVE, or sure, System Link if you prefer.”

In addition to the four-player variety over LIVE or system link, two players will be able to tackle the action with a split screen, and can even join up with another split-screen pair for some 4-playeer action.

Smith also explained the reason for maintaining such secrecy regarding this bit of Halo3 news. “We wanted to make sure all our “t”s were crossed and our “i”s dotted before unveiling this important new part of Halo 3’s Campaign mode,” he said.

Smith also lent the following example to depict how the co-operative gameplay can affect the game:

Acting as a team is a fantastic new twist to the Campaign gameplay – something that works as well on foot, in close confines as it does on the battlefield, with large scale vehicle mayhem. Scared of Jackal snipers? Send out a scout to see what dangers lie ahead. Terrified of an open field? Flank your enemies and swipe their rides.

Now, we are really looking forward to the launch of this game, which has been scheduled for September 25, launch.