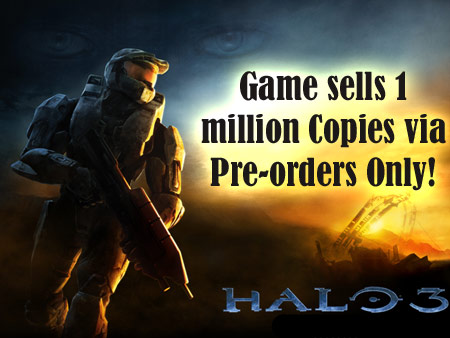 Bungie Studio’s much-awaited Halo 3 game has just earned itself a milestone as pre-orders for the game have already passed the 1 million mark, even before its actual launch (September 27, 2007).

Major Microsoft partners such as BestBuy and Gamestop have reported a combined total sale of over 1 million Halo 3 units already.

Jill Hamburger, vice president of movies and games at BestBuy said: The excitement for Halo 3 is incredible. From our pre-orders online and the buzz we’re hearing in our stores, we know this release is going to be one of the biggest entertainment events of the year. We’re thrilled to be able to bring it to our customers.”

As Halo 3 will be an Xbox 360 exclusive game, Microsoft the makers of the Xbox 360 console, have just unveiled a list of upcoming promotions. Among the leading consumer brands that have tied up with Microsoft for promoting the game are well known names such as Mountain Dew, 7-elevn, Burger King, Comcast and Pontiac.

Mountain Dew will be coming out with its very first beverage to be co-branded with a videogame. The drink called ‘Mountain Dew Game Fuel, will be available nationwide, just for a limited period of time starting August 13.

From the F&B department, we also have Burger King who will be unveiling its Halo 3-themed packaging, inclusive of exclusive Halo 3 contents from September 23 onwards. And, 7-Eleven will be unveiling three Halo 3-branded collectible Slurpee cups. Yummy, we say!

What’s more; 7-Eleven is also offering the multitudes of Halo fans a chance to win a role as a voice actor in the upcoming Xbox 360 game called “Halo Wars”. This is a strategy game that is being developed by Ensemble Studios.

Pontiac will be hosting a number of Pontiac Gamers Garage events in select locations, giving fans of the game a chance to play a Halo 3 single player campaign for the very first time, even before the game’s official launch.

That’s not all; 100 lucky winners will also get a free copy of Halo 3. We yet don’t know which of the three Halo 3 versions it’s going to be. But, one really lucky winner will get a Limited Edition Halo 3 G6 GXP Street Car!

Comcast will be hosting exclusive video content that could include user-generated movies and machinima on its websites at www.zidio.com and www.gameinvasion.net.

Microsoft also revealed the reason behind the three separate Halo 3 versions- Legendary Edition, Limited Edition and Standard Edition. Well, it’s pretty obvious knowing Microsoft and its marketing strategies. The Halo 3 launch revolves around the number 3, hence his will be a perfect opportunity for the company to capitalize on it and triple its revenues.

Now that Halo 3 has already broken the record (1 million pre-orders), its plain to see that when the game launches, it might just break the record established by World of Warcraft’s The Burning Crusade expansion pack. This game sold over 2.4 million copies in just 24 hours of its availability.

Well, that’s all the Halo 3 news for now. But we are sure that a lot more will be coming up soon!