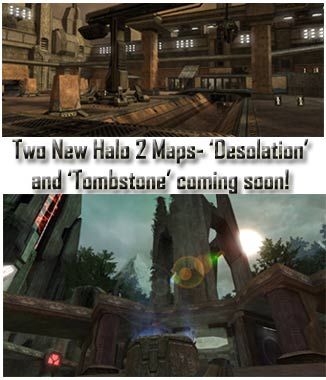 Halo fans will be really happy to know that two new maps for Halo 2 will be out shortly. So even though fans will have to wait a while for Halo 3, these new maps will keep them busy to the core. Microsoft Game Studios together with Bungie Studios has indeed confirmed the upcoming release of two much-awaited maps for Halo 2.

These two new maps will be available as premium downloadable content for Xbox as well as the Xbox 360 on April 17. They are named as Tombstone and Desolation. The new Halo 2 maps will bring back to life ancient battlefields and legendary fights from the original Halo: Combat Evolved.

In fact, the Tombstone map is a remake of the most popular multiplayer Halo 2 map. Hang ‘Em High. This map has all new graphics, features and a lot of surprises in store for fans.

The second map, Desolation is a Deathmatch-oriented map and a great remake of the original Halo map Derelict. This map has new graphics, effects and massive gameplay overhaul.

So what’s the story on these new Halo 2 maps? Well, the two maps are recreations of original Halo maps. These maps that have been developed by Bungie and Certain Affinity are Microsoft’s way to thank Halo fans for their support as they surpassed 800 million hours of Halo 2 gaming via Xbox Live.

The two new Halo 2 maps are available through the Halo 2 in-game content downloader for both Xbox and Xbox 360 on April 17. The maps are priced at $4 (approx. Rs.180).