If you’re into destroying smartphones, doing that to every generation of the iPhone ever made has now become a new benchmark to breach. YouTuber Zach Straley somehow not only managed to procure all those devices, but also immersed them in water in order to find out which ones survive the irrigation.

He had quite some hopes due to the fact that in an earlier video, he had found that the Apple iPhone 6S had surprisingly survived a water immersion test. Needless to say, all the handsets which he dunked into the water for his latest experiment died a quick death, including the 6S model.

One has to feel bad for the guy for losing ten iPhones at once, but he clearly called for it. Watch his experiment in the video we’ve posted below, as he superglues his devices carefully onto a red colored board and accompanies them with stickers to denote their model names, before of course immersing them into a bucket full of water.

He is thoughtful enough to set off timers on the devices in order to reveal the time in which they conk off. The test eventually tells us that the iPhone 3G lasted the longest under water. But we’re really not sure what to take from this.

Also Read: Your iPhone is to be blamed if you’ve reached work late

As it is, iPhone devices are getting so expensive these days that people have been found actually trying to sell their kidneys in order to buy them. And here is one man who is willingly destroying every Apple handset ever made just for a few thousand YouTube views. 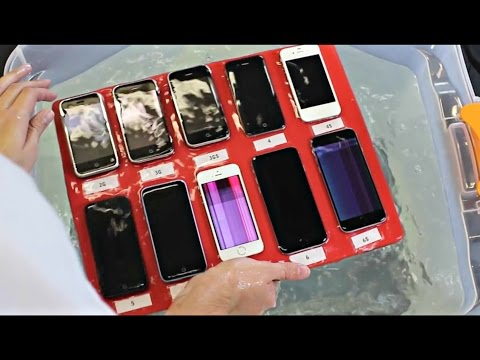 With some well-known Android flagships offering waterproof designs, the iPhone is yet to jump into the game. Who knows, perhaps the iPhone 7 could be the one to break that tradition.