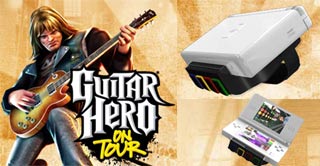 The popular game that has rocked the gaming world is back in action with a promise of delivering an electrifying sound through the Nintendo DS bundle. Guitar Hero is back in news columns with the new Silver/Black Nintendo DS branded, with the Guitar Hero logo presenting itself as a limited-time bundle with Guitar Hero: On Tour.

The bundle will start selling through North American retailers nationwide from June 22, 2008 onwards. The game uses a Guitar Grip peripheral that provides a lending support to shred tunes on a mobile basis.

“This one-of-a-kind bundle makes Nintendo DS even more appealing to our ever-growing audience of players,” said Cammie Dunaway, Nintendo of America’s executive vice president of Sales & Marketing. “Like Nintendo DS itself, the Guitar Hero franchise has attracted millions of new players to the world of video games.”

“We are thrilled to be the first third-party publisher to partner with Nintendo on this unique offering,” said Dusty Welch, Head of Publishing for RedOctane. “With the Guitar Hero-branded Nintendo DS and our Guitar Hero: On Tour game and peripheral, this amazing bundle delivers gamers a complete Guitar Hero experience they can enjoy anytime, anywhere.”

Music Enthusiasts and Rockstars get ready to jump as the game is set to play anywhere with its portability features. The Bundle’s Guitar Grip peripheral is the main attraction which is an ergonomic extension on the back of the player which resembles the Guitar Fret board. The gaming device gives a great experience with its Guitar Hero pick-stylus which can be used on the touch-activated screen.

With the use of a local wireless network, the DS connects to other players to shred some more of music tracks. Punch in a voice through the DS microphone which adds in a touch of customization and personalization. Nintendo introduces the game with its array of Gibson guitars teamed with five unlockable new venues and options of choosing over six characters which also throws in two rockers on to the stage that is exclusive for DS-gamers only. The pricing details of the Nintendo DS with the stamp of Guitar Hero haven’t been revealed as yet.