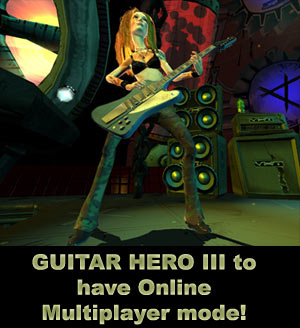 Last week we had reported that Guitar Hero III, the third installment of the hugely successful game will be available for the PlayStation 3, PlayStation 2, Xbox 360 and Wii platforms. Now here is some more news regarding the much awaited game title. Guitar Hero fans rejoice!

First off, Guitar Hero III will feature an online multiplayer mode and secondly, the game will have a new guitar attachment peripheral just like the previous games did.

In fact many fans of the game hoped for such an online multiplayer feature in Guitar Hero 2, but it didn’t happen.

And, if you are wondering whether you will have to play Guitar Hero III using past versions of the typical guitar peripheral, then read on.

“We are really excited about the Wii game because there are so many options for the Wii remote. However, you will play the game with a guitar peripheral and it will be similar to a guitar you’ve seen in the past,” confirmed Huang.

Huang also confirmed that the Wii version of the Guitar Hero III game will be as deep and complete as on every other game platform. It will indeed feature online play, as well as downloadable music content through WiiConnect24.

Guitar Hero III will be out this fall for the PS2, PS3, Xbox 360 and Wii platforms. Apparently, there is a version of Guitar Hero in the works for the Nintendo DS as well. But you will have to wait until the beginning of next year for the DS version.