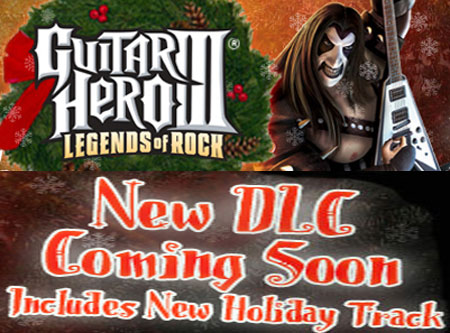 The recently released Guitar Hero III: Legends of Rock now gets a downloadable track pack which include master recordings from killer artists like Linkin Park, The Used and Mastadon.

The downloadable track pack from Warner/Reprise includes master recordings like “No More Sorrow by Linking Park, “Sleeping Giant” by Mastadon and “Pretty Handsome Awkward” by The Used.

Further, Activision will be offering single song downloads from popular European bands like Extremeoduro, Trust and Die Fantastichen Vier and a free exclusive rock rendition of the Christmas classic “We Three Kings” by Steve Quimette. The single song downloads offer such popular singles as “So Payaso,” from Extremoduro, “Antisocial” from Trust, and “Ernten Was Wir Säen” from Die Fantastischen Vier.

Guitar Hero III: Legends of Rock features a star-studded soundtrack by legendary artists like Guns ‘N’ Roses, The Rolling Stones, Pearl Jam, and rage against the Machine amongst others.

The newly announced downloadable track pack and single tracks will be available for the Xbox 360 and the PlayStation 3 consoles.

It was also announced that Guitar Hero players will now get access to a new wireless guitar controller. Xbox 360, Wii and PS3 owners will get an exclusive Gibson Guitar’s Les Paul model to strum, pluck and tinker around with. PlayStation 2 owners will get a new Gibson Kramer guitar known for its pickups, electronics and construction for furious finger fretting.