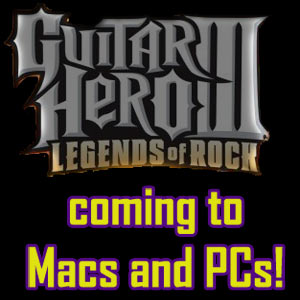 Previously, Guitar Hero and Guitar Hero II was available on consoles such as the Xbox 360 and the Sony PlayStation 2. But, now the third iteration of the Guitar Hero series will be released not only for the Xbox 360, PS3, PS2 and Wii consoles, but also on PC and Mac platforms.

The Guitar Hero III for PC and Mac platforms is being developed by Aspyr, and is expected to include explosive new content and features such as a multiplayer action-inspired battle mode, boss battles, unlockable content and stunning venues.

The Expanded online multiplayer mode will also enable PC and Mac users to pick their guitar strings in a head-to-head battle against players from around the world and across either platform as well.

Ted Staloch, Executive Vice President, Publishing for Aspyr said that working with such a wildly successful franchise and helping to strengthen an already powerful brand has us feeling like rock stars ourselves only without the fame, money or musical talent.

Dusty Welch, head of publishing at RedOctane feels that providing the option for our fans to play Guitar Hero at their desk or on a laptop on the go is incredibly exciting, and they’re thrilled to now offer the ability to rock out literally anywhere and everywhere.