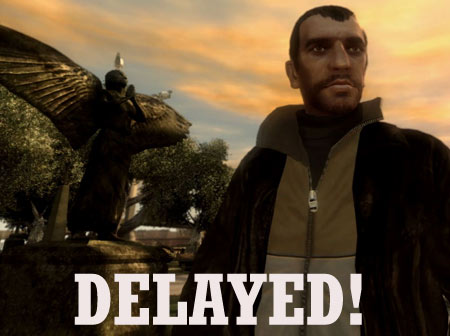 In case you are one of those who are eagerly awaiting the release of Grand Theft Auto IV that was scheduled for an October 2007 launch, then we suggest you occupy yourself with other things to do, the game’s release has been delayed.

Take-Two Interactive has reported that the release of its upcoming GTA IV game for the Xbox and PS3 video game consoles has been postponed until Q2 2008. The company also reported that they are updating the third quarter and fiscal year 2007 direction to reflect the movement of Manhunt 2 for the PS2 and Wii consoles and the PSP out of the third quarter and the fiscal year.

Strauss Zelnick, Chairman of Take-Two said, “With Grand Theft Auto IV, Rockstar is setting a new standard for next generation video games. Certain elements of development proved to be more time-intensive than expected, especially given the commitment for a simultaneous release on two very different platforms. We all recognize that perfecting the game is vital and I can assure everyone it will be worth the wait. We owe it to the game’s millions of fans, to our dedicated development team, and to our shareholders to make sure that Grand Theft Auto IV is a groundbreaking gaming experience that takes maximum advantage of next generation technology.”

Whew! Now that you heard the shocking news from the horses mouth itself; all you GTA fans should read on to find out why you won’t be getting near the game anytime soon.

Michael Pachter an analyst at Wedbush Morgan spoke to GamesIndustry.biz. Pachter told GamesIndustry.biz, “We think it is likely that the Rockstar team had difficulty in building an exceptionally complicated game for the PS3, and failed to recognize how far away from completion the game truly was until recently. We think it is also likely that Take-Two had a contractual commitment to Sony that it would not favor competitor Microsoft by launching the Xbox 360 version of GTA IV prior to launching the PS3 version, and believe that any delay of the PS3 version necessitated a delay of the Xbox 360 version.”

Pachter also mentioned that the delay of GTA IV was clearly not the fault of new management and felt that it should have been communicated to investors much earlier.