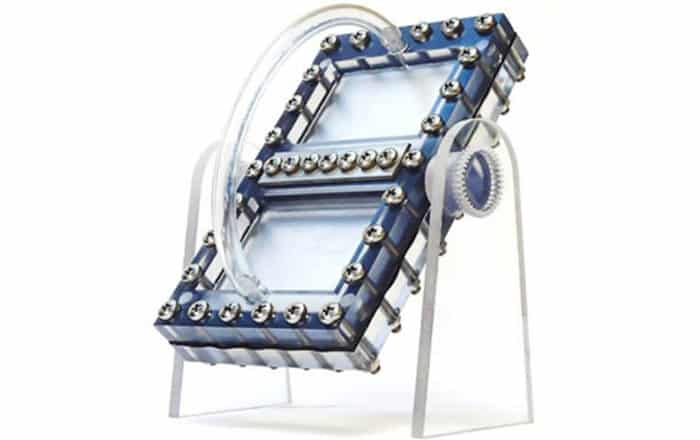 A group of scientists at MIT have come up with a cool concept for a new type of battery which generates energy through the power of gravity. It works just like an hourglass, with a liquid flowing from one end to the other without the need for complex mechanisms.

The researchers published their findings in the Energy and Environmental Science journal. While liquid flow batteries have existed since the 1970s, their concept for a ‘low-dissipation, pumpless, gravity-induced flow battery’ does away with the complicated system of tanks and pumps which are necessary to keep chemicals moving between positive and negative terminals to create energy.

Instead, the MIT scientists put forward a new system where gravity handles the major grunt work in pushing the liquid slurry along a narrow channel. They’re calling it a gravity-induced flow cell or GIFcell for short. The amount of energy generated by the battery can even be increased or decreased by adjusting the angle of the device, similar to how an hourglass flows faster or slower depending on how a person is placing it.

The researchers, led by Kyocera Professor of Ceramics Yet-Ming Chiang, have even managed to build a proof-of-concept prototype to demonstrate its potential. According to them, the GIFcell can achieve a round trip energy efficiency as high as 91%. Such redox flow batteries have massive potential and could change energy generation practices for the better in the future.

For instance, the battery could be an ideal way of supplying energy to renewable technologies like wind and solar plants with minimum loss of power. Sadly, such a future is still a long way off since the device is not ready for commercialization just yet. Still, Chiang thinks that the design will eventually lead to a real product which may have multiple applications.