Until now, you’ve only been able to use the front of your smartphone’s display for input, right? This is all set to change; the wheels are in motion. The partially transparent Grippity is a tablet which will let you interact with its screen from both sides and use all ten fingers while doing so.

Sounds cool? Even if you aren’t keen on it, count Samsung among the interested parties. Early this month, the company was caught patenting rear touch controls. And now the Grippity is here boasting of similar technology too. Though it’s not a very good looking one, the technology makes up for that.

The upper part of the device is opaque and allows for thumb input. And it’s the lower portion which consists of a semi-transparent, dual-sided, capacitive, multi-touch display. This panel measures 7 inches and spits out visuals in 800 x 480p resolution. If you sit through the video, then you’ll see that it could feel like more of a gaming controller in the hands than a tablet.

The backlighting of the touchscreen has been modded and the result is a display which is not as bright as regular LCDs, but it’s transparent. The internal components consist of a Cortex A8 processor, 512K of RAM and a 2400mAh battery. There’s 4GB of onboard memory and an SD card slot under the hood enables up to 32GB expandability. 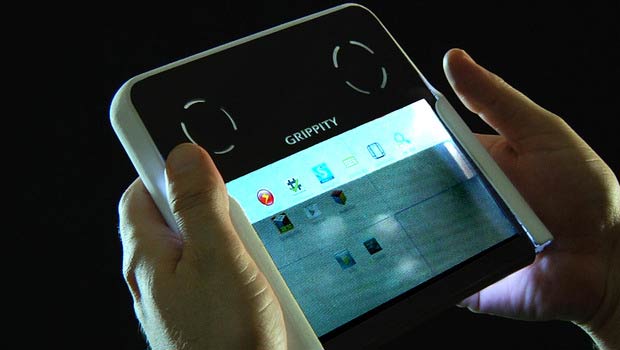 While the Grippity currently runs on Android Jelly Bean 4.2, it could be tweaked to run KitKat too, providing the specs don’t offer cause for argument. An IR blaster, Wi-Fi and Bluetooth will be on the features sheet too. If the project reaches its $199,000 goal on Kickstarter, the device will start shipping out in October 2014.