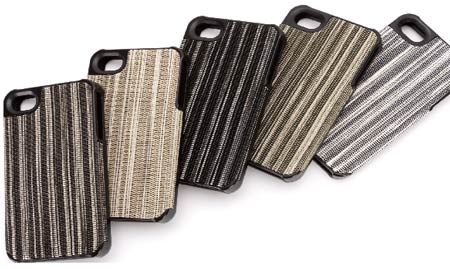 Taking the secret conspiracy of one case per iDevice closer to realization is the Griffin Chilewich iPhone cover dubbed the Elan Form Chilewich, Rib Weave for iPhone 4 and 4S handsets. It’s all about conservative looking weaves and patterns in very sober shades of black, brown and white.

Described to flaunt a low-profile design, the Rib Weave vinyl is a piece of stout, woven material which is crafted to deliver a very natural finish. And the ‘dry colors’ undoubtedly add to that sort of appeal. But apparently, we shouldn’t be fooled by the Griffin Elan Form Chilewich’s appearance. That’s because Griffin is laying the foundation of the sheath with a sturdy shell that could offer a certain level of protection to the enveloped device.

Sandy Chilewich, Founder and Creative Director of Chilewich|Sultan, cited, “Your phone is in your hand, on the table and next to your bed. Like a watch, it is part of your everyday life. However, your phone provides a very tactile experience, and the texture and feel of my new Rib Weave is wonderful to the touch. I also feel that its subtle neutral palette works for both men and women equally and it is a sophisticated accessory that really says something about you.” 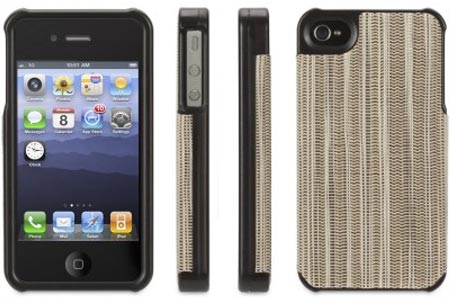 So there’s the Griffin shell and then the Chilewich weave layered over it to render an eye-catching case build. What’s more, the construct is touted to rub along well with a host of charging docks. For those who remember, this is not the first time that the two manufacturers have come together. Back in 2009, the companies had presented iPhone 3GS users with the Elan Form Chilewich, Mini Basketweave accessory.

The Griffin Elan Form Chilewich, Rib Weave for iPhone 4 and 4S can be picked up from Apple retail outlets as well as both manufacturers’ online portals. It’s priced at $39.99 and is out in color options of mahogany, pearl, black, coconut and toffee.