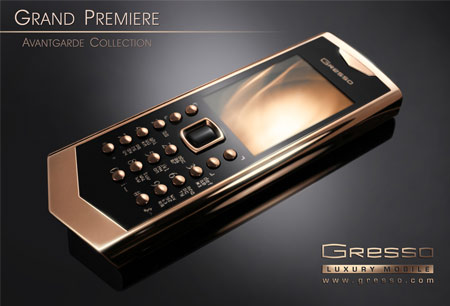 Gresso has added the Midas touch to technology by unveiling the exclusive Grand Premiere mobile phone. This latest glitter gadget to walk the tech ramp is noted to be the newest addition to the company’s Avantgarde Collection and is specially fashioned to tug at the heartstrings of luxury enthusiasts and sophisticated users strewn all across the globe.

Providing fashionistas with the ability to proudly flaunt their handset, the manufacturer has drenched the exterior design and intricate details in complete gold, providing an elegant overall appearance. The total weight of the 18 carat noble metal employed in the handset apparently amounts to 150 grams. While the solid frame is dipped in gold, there is a blend of yellow gold and black surface sapphire screen endowed on the phone. Measuring 121mm x 46mm x 12mm, it tips the scales at 190gms and is touted to include the Symbian S40 platform. 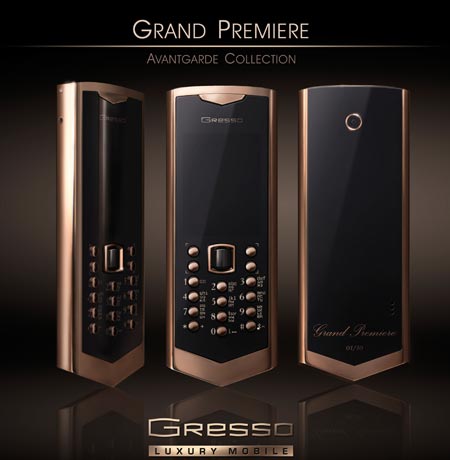 The front and back panels of the device have been studded with highly resistant sapphire parts that weigh in at 138.5 carat. Besides shining bright with its polished look, the handset bears a 12mm slim form factor. As the company reveals, the gold navigation and functional keys of the model are designed by precision cutting technology while the letters and numbers on the keys are laid on via laser. The outer shell further sports a gold inset triangle-shaped piece as well as the Gresso logo.

The Gresso Grand Premiere price is estimated at $50,000 and since it is a limited collection, the 30 exquisite masterpieces will be etched with a personal number located on the back panel. Earlier, the company had also put its own spin on the iPad, crafting it with 200 year old African Blackwood and an 18k gold Apple logo.