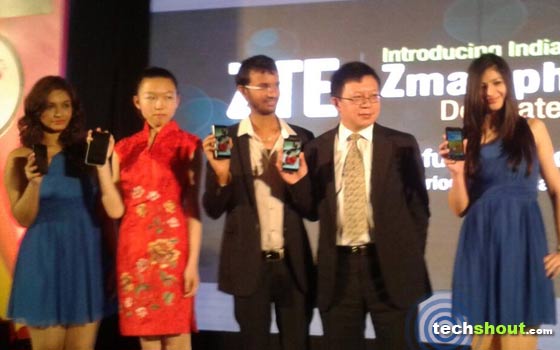 ZTE has been teasing fans in India with glimpses of upcoming releases for quite some time now. We’re reporting from the company’s launch event where the ZTE Grand X Quad Lite, Blade G2, Blade C, Blade L, Blade E, Kis Flex and four 3G data cards have been unveiled. Apart from showcasing these products, the Chinese manufacturer has also promised to bring the Grand S to India before the end of this year.

The Android 4.1-munching Blade C has a 1GHz dual core chip, a 4-inch display, 512MB RAM, 4GB onboard storage, up to 32GB microSD card expandability, two SIM slots and a 3MP sensor. Sipping off Android 4.1, the dual SIM Blade G2 integrates a 1.2GHz quad core processor, 512MB of RAM, 4GB flash memory, a slot for a 32GB microSD card, a 4.5-inch screen and a 5MP camera. The Blade E rubs along with Android 4.1.2 and sports much the same specifications as the G2, apart from adding a 0.3MP front lens.

Coming down to the Blade L, it rolls along on Android Ice Cream Sandwich and a 1.2GHz dual core processor. There’s a 5-inch touchscreen nailed across its front side which also hosts a VGA camera. 512MB of RAM, 4G ROM, 32GB microSD card expandability, dual SIM slots and a 5MP rear sensor are part of the specs sheet. Lastly, the Gingerbread-powered Kis Flex has a 3.5-inch display and a 1GHz chip (single core, most probably). The rest of its features cover 256MB RAM, a slot for a 32GB microSD card, 512MB ROM, a 2MP camera and dual SIM accommodation.

For those interested in the 3G data cards we’ve mentioned above, they are priced between Rs 1,799 and Rs 2,499.