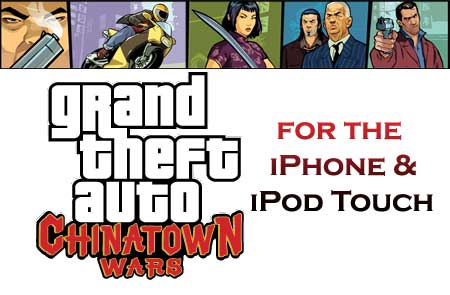 Grand Theft Auto: Chinatown Wars is the thirteenth installment in the popular Grand Theft Auto franchise published by Rockstar Games. We had earlier reported that this title would release for the PSP console this autumn. Now other gaming enthusiasts who possess other portable devices like the iPhone and iPod Touch need not be disappointed. The highly-awaited installment will also release for these portable systems this fall.

“Chinatown Wars is a perfect match for the iPhone and iPod touch. We are very excited to bring this incredibly ambitious version of Liberty City, with this level of detail and immersive gameplay on Apple’s new gaming platforms,” exclaimed Sam Houser, Founder of Rockstar Games.

Looks like handheld consoles are the way to go for this particular title in the famous GTA franchise. Grand Theft Auto: Chinatown Wars can be presently acquired for the Nintendo DS. And to add to the excitement of autumn, this title is set to unleash for the PSP as well as the iPhone and iPod.

The GTA game follows the thrilling escapades of a young Triad named Huang Lee. After the mysterious death of his beloved father, Lee travels to Liberty City. Gamers will be able to scope and explore through the dangerous streets of the city as they came face to face with the evil stench of corruption and crime within the Triad crime syndicate.