When Apple launched the iPhone 5S a few months back, it started selling the device through its online store for all major carriers in the US. While Sprint, Verizon and AT&T have contract-based models in place, the T-Mobile variant was available unlocked. However, the handset would ship with a SIM card from the provider.

Well, it took Apple a few months to make its iPhone 5S flagship available unlocked and SIM free. The only difference here is that you won’t have to deal with the SIM card from T-Mobile. Prices are still the same as the former version. You can pick up the 16GB model for $649, while the 32GB and 64GB options will set you back by $749 and $849, respectively. 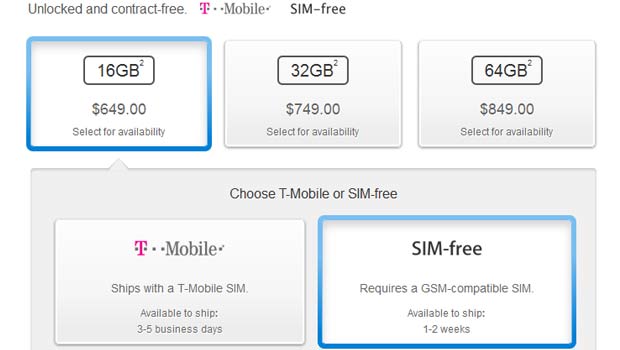 The iPhone 5S features the company’s new Apple A7 SOC which is based on the 64-bit architecture, and the M7 co-processor. The very same chipset also powers the new iPads, Air and mini, which went official back in October. Back to the handset in question, the device looks no different from its predecessor and it also measures the same in dimensions. The notable additions here are the new 8MP camera and the Touch ID fingerprint sensor.

Here are the specifications in more detail:

If you’re looking to get your hands on the SIM free iPhone 5S, then head over to the company’s online store. The device is expected to ship in 1 to 2 weeks and supports GSM SIM cards.

Facebook
Twitter
Pinterest
Linkedin
ReddIt
Tumblr
Flip
Previous articleLogitech PowerShell Controller is a gamepad as well as a battery pack for your iPhone
Next articleApple won’t get into the phablet game with iPhone 6, 4.9-inch display expected