Goophone is known for creating low-cost rip-offs of popular smartphones, but its Goophone N4 smartphone which is a clone of Samsung’s upcoming Galaxy Note 4, looks far from cheap. It appears so that the Chinese OEM has spared no expense in creating this handset and it hasn’t held back where specs are concerned either.

Now you’re probably thinking – There’s still a few weeks left for the Galaxy Note 4 to go official, so how did Goophone manage to clone the design? Well, the answer is pretty simple – There have been multiple leaked pictures of the upcoming phablet available and to be honest, Samsung pretty much uses a monotonous design for its devices. 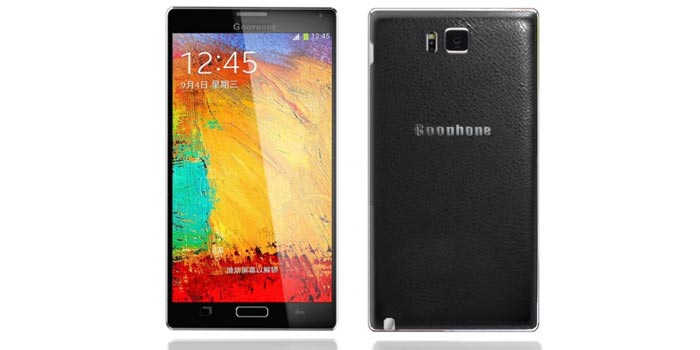 The Goophone N4 will be sold in three different models. Two versions have been spotted on the company’s website offering options of 1GB RAM with 8GB storage and 2GB RAM with 16GB flash memory. These devices also feature a 5.7-inch 720p HD touchscreen.

GizChina has spotted a third variant on an online retailer where the device packs a 1080p display and 3GB of RAM. Well, apart from the changes in screen resolution and memory, the remaining features are identical. All models of the N4 run on Android 4.4 KitKat out of the box and are said to offer dual SIM support as well.

Here’s an overview of the Goophone N4 specs: