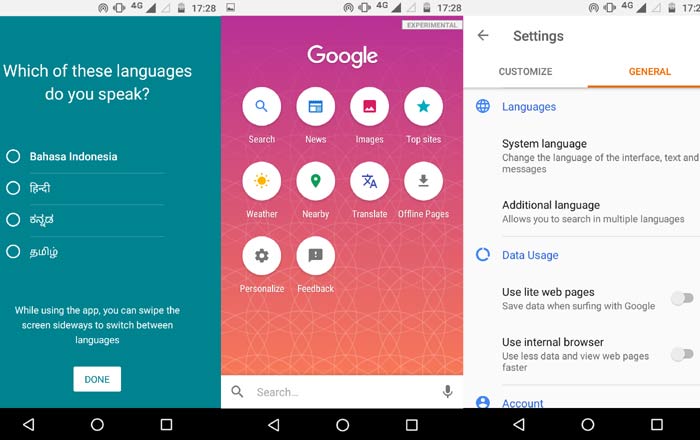 Lite versions of apps which take up less data and space are pretty common these days, with big names like Facebook and Twitter hopping on the bandwagon. Now it seems Google wants to be part of that gang with a lighter version of its Search app.

Google has apparently begun showing ads in Indonesia asking users to try out a new experimental search app. It’s called Search (Test App) for now, but will probably change its name to Search Lite when it’s ready to go official.

Search Lite appears to target countries like Indonesia and India, as evidenced by the language options for Indonesian and Hindi. The overall interface aims to make the Google experience a lot simpler for people, placing the search bar at the bottom and featuring a bunch of icons to quickly access topics like the news, weather, cricket scores, or translate.

There’s even an in-built browser which presumably loads up faster than regular browsers. It’s not clear if it’s an offshoot of Chrome or a new kind of browser entirely. Users can also force Search Lite to only show them lite web pages, forcing all sites to go through Google’s Lite Mode.

Like all lightweight apps, Search Lite will probably take up less space and hog fewer bytes of data. There’s an offline option for times when there’s no data to be had, as well as voice searches when typing is too inconvenient.

You can download Search Lite via APKMirror since the official version is yet to make it out of Indonesia. Once installed, you can choose the ‘Bahasa Indonesia’ language option to interact with the app in English.