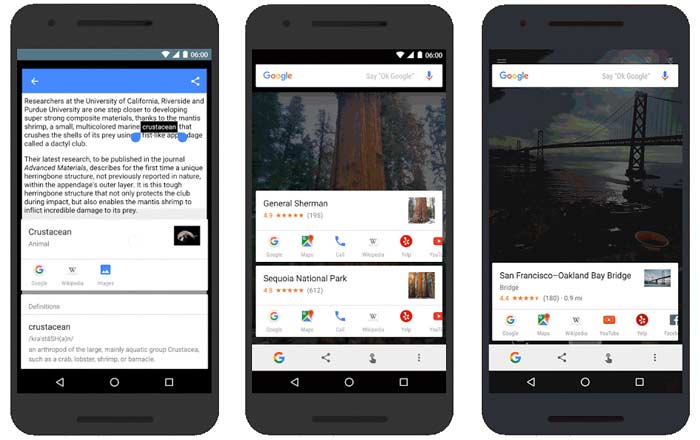 Google’s Now on Tap is a pretty nifty feature, making sure Google Search is only a home button press away. The tech giant is now looking to endow it with even better features a year or so since its arrival.

First up is the ability to select a specific word or phrase in a page. This should prove to be immensely useful in situations where the page is covered wall-to-wall with text such as in an email or chat app. For instance, you could trigger Now on Tap to just search for the term crustacean and get definitions and photos instantly.

Now on Tap can also search by image now. So if there’s a picture in Google Photos which you need to suss out, the tool can quickly analyze it and present the info to you in an easy-to-read card format. This new-found skill isn’t just restricted to native Google apps either. You’ll also get to take advantage of it to get up to speed on an image in applications like Pinterest.

Google is also extending this ability to real time photography. This sounds like a pretty cool concept, but it’ll be interesting to see how efficient it is out-and-about given the number of different variables which could affect a live shot. The process to kickstart it is fairly straightforward. You just have to open the camera app, point your phone at the object and hold down the home button.

Now on Tap is then supposed to present a card with deep links to relevant apps. Google claims it can help you get more information on landmarks like the Bay Bridge. It may even be utilized to find out more about a film by scanning its movie poster.

Google is rolling out the new additions to Now on Tap right now. Word definitions are restricted to English currently but will be extended to other languages in the future.