Google’s next Android flagship could be called the Nexus X

The last time we heard about a Google Nexus X smartphone, it was in 2012 when some graphics designer pulled a prank on the tech word. Well, this time around it looks as if such a device does exist and it’ll apparently the final branding for the highly rumored Nexus 6.

Screenshots from the popular AnTuTu application running on the alleged Google Nexus X have arrived online, courtesy of TKTechNews and a good deal of information has also been provided. The Nexus 6 is a very mysterious device. It’s said to be based on the Motorola Shamu which will be headed to Verizon as the Moto S under the Android Silver program. 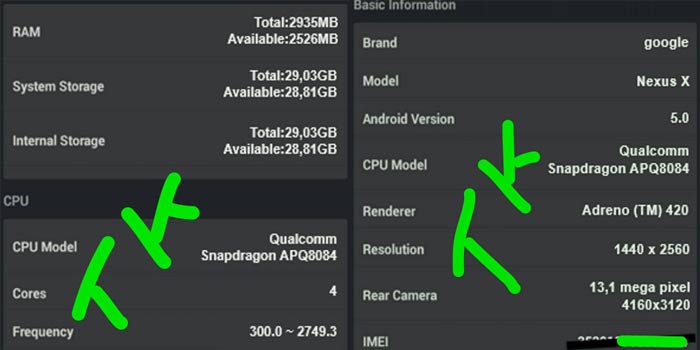 What we know thus far is that it’ll carry a 5.9-inch display with 2560 x 1440 WQHD resolution and be powered by the latest Snapdragon 805 processor which has a quad core configuration and a 2.7GHz clock speed. The phone will also have 3GB RAM, a 13MP camera and 32GB storage.

Check out: HTC Flounder aka Nexus 9 gets certified by Wi-Fi Alliance powered by Android L

The screenshots have even disclosed that Android L which will reportedly go official as Lemon Meringue Pie carries the version number 5.0. This is highly possible considering that the new OS is a major step-up from version 4.4 KitKat.

As reliable as this information on the Google Nexus X may appear, we’d still recommend taking these details with a pinch of salt as nothing has been confirmed as yet.