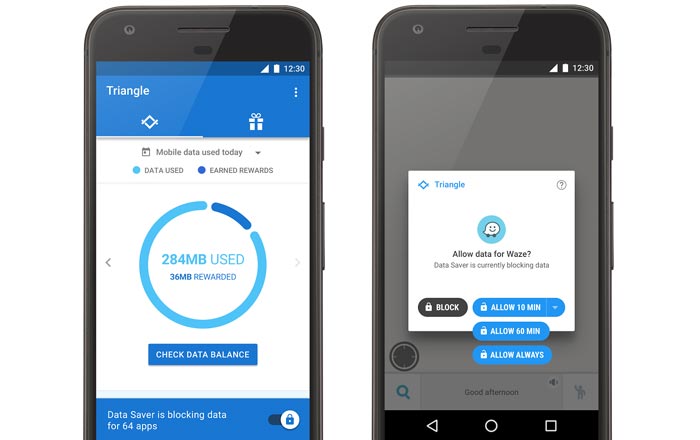 There are plenty of data saver apps out there promising to help you cut down on your usage, but none of them have the Google branding on them. That ends now with the release of Triangle, the search giant’s latest experimental application.

Google Triangle is only being tested in the Philippines as of now. Its goal is to give you greater control over your data allocation. It does so by monitoring your current usage and letting you block apps from accessing the internet. The former is a simple way to gauge which of your applications are eating up the maximum amount of data.

As for the latter, it comes under Triangle’s Data Saver feature which stops chosen apps from using mobile data. This can be a complete blockage or a limited one. For instance, you can allow Waze to utilize data for 10 minutes, 60 minutes, or always.

This is a pretty nifty solution to the problem of apps constantly using you precious data in the background without you being aware of it. The fact that you can specifically choose which applications can go online sets Triangle apart from other data saving apps.

Google even has a rewards scheme in place to encourage your activity, though this is only open to Globe and Smart prepaid subscribers. You’ll firstly get a 100MB welcome gift right after completing registration. After that, using apps like Pinterest and Grab will earn you small amounts of data.

So if you spend 10MB of data while in OLX, you’ll get back 10MB rewards per day for the next 7 days. There’s also a reward just for downloading apps, roughly the same as the app’s size. You can additionally check your prepaid data balance in the application itself.

You can download Triangle via the Google Play Store. If you don’t stay in the Philippines, you can get it via APKMirror.