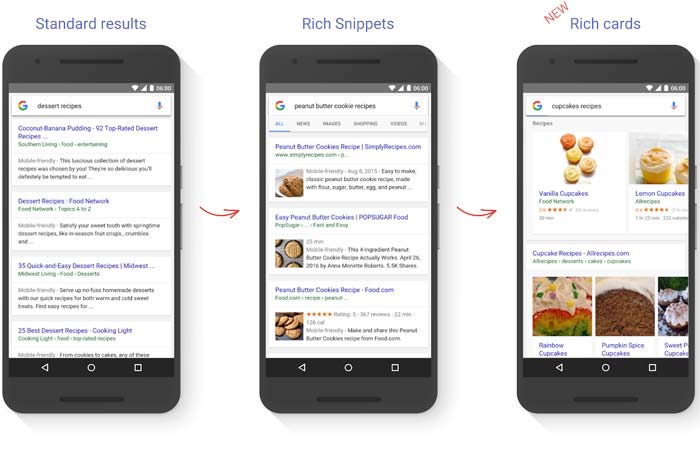 Amid the chaos of Google’s big announcements at its I/O 2016 event, the company has chosen to debut a new feature focusing on its original claim to fame- Google Search. The firm is introducing a brand new rich cards tool within its popular search engine to make finding things like recipes even easier than before.

Rich cards are basically the natural evolution of rich snippets. As can be seen in the screenshot above, the latter offers a tiny picture with text surrounding it. The former changes up this format by making the image the point of focus. It’s accompanied by just a single line of text describing what exactly is being depicted.

The new rich cards are additionally being presented in an easy-to-browse carousel system which can be swiped left or right. Carousels could contain cards from the same website or different sites. It’s a solid concept, since photos usually command a person’s attention much faster than words do.

This falls in line with Google’s basic aim which is to make sure content is structured more engagingly with a special emphasis on delivering an enhanced mobile experience. Site owners stand to benefit as well, since the format gives them the power to stand out in search results with an attention-grabbing image.

Google is taking things slowly with the new initiative. People can only view rich cards for recipes and movies in English search results right now. It’s planning to experiment with other content categories in the future. Food recipes are an ideal place to start its exploration, given the fact that a photo goes a long way in helping a consumer quickly figure out what they want to eat.