A completely new Android app has just been launched by Google in the form of Device Assist which has been aimed by the company at providing users with tips and proactive troubleshooting to help them use their devices in a proper manner. Although it’s live now on the Play store, this utility is only compatible with Nexus, Google Play Edition and Android One gadgets running Android 5.0 Lollipop.

Device Manager is basically aimed at fixing any potential issues you have with your devices. Moreover, it also helps you gain the best out of your phone by making small suggestions that include reducing display brightness, use a different charger and more. It even offers various tips based on the way you go about using your smartphone. 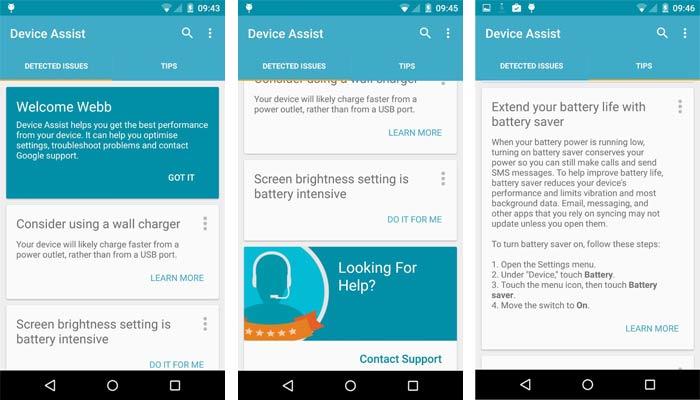 Most importantly though, it features easy access to live Google support in case you’re experiencing problems which you cannot solve. This feature works only for Nexus and Google Play edition devices, and leaves out Android One handsets. But that’s not as big a catch as the one you’re about to read: the app itself is US-exclusive.

Yes, you cannot download it through your local Play store unless you’re from America. We hope this changes in the future, but no such plans have been announced by Google as of now. In the meantime, Android Police has an APK of it which you can try out if you’re so eager.

Remember, Device Assist is only meant for Nexus, Google Play Edition and Android One devices running the 5.0 Lollipop version of Google’s mobile OS. Here’s the Play store link of the app if you wish to know more about it.