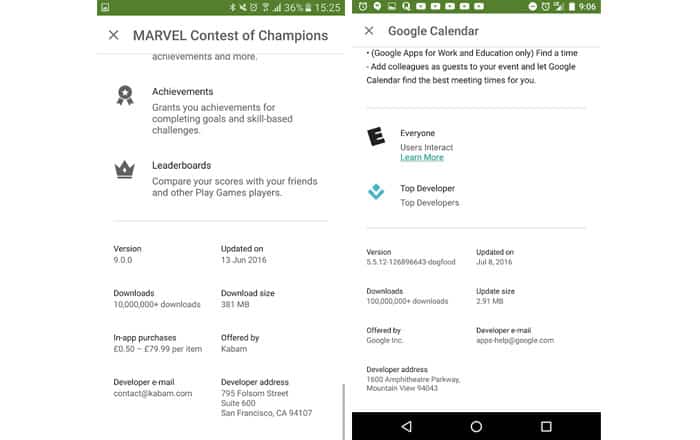 Google Play has rolled out some major changes to its platform which will let you see exactly how much space an app will take up in your phone, in addition to reducing the size of updates. The new additions come at a critical time when app upgrades are becoming more frequent, whether it be to introduce new content or repair security holes.

The first big change concerns the file size of an app. The Google Play Store will now showcase the actual download size of an application instead of just the APK file size, letting you make an informed decision as to whether you should get it or not. Furthermore, if you’ve already downloaded a tool, the platform will tell you how big the update is.

It’s a big improvement over the previous system which kept Android users in the dark when it came to finding out how much data an update would suck up. Google’s also come up with a new delta algorithm called bsdiff to reduce the size of an upgrade by up to 50% or more compared to the previous formula.

For instance, if the earlier system had produced a 22.8MB update file size in Chrome, the new one would cut the figure down to 12.9MB, an impressive reduction. Similarly, a 15.3MB upgrade will now be rendered down to 3.6MB under the fresh regime. Google notes that bsdiff works best for uncompressed native libraries.

Applications which don’t have uncompressed native libraries will still see a 5% reduction in size on average thanks to the new state of things. On the developer side of things, Google has brought its delta and compression algorithms to APK Expansion files which are mostly used for games.

Developers utilize them to add up to 2GB in high-res graphics or media files to their applications. Google’s new system will see the size of APK Expansion files cut down by 12%. Even updates will be slashed by 65%.