The Messenger application which Google first introduced through the Nexus 6, and later made available for other handsets, has been blessed with a fresh new update. This latest version of the app kicks in a quick reply feature as well as a widget meant for single conversations.

The update to Messenger has begun its rollout; so expect it to reach your devices in the coming days. It’s a great option for someone who’s fond of Material Design interfaces and is looking for a simple SMS application to replace their stock utility.

The updated version has been laced by Google with a pretty useful quick reply feature that lets you respond to incoming texts without actually opening the full app. This takes place in a special translucent interface which you can see in the image right below. 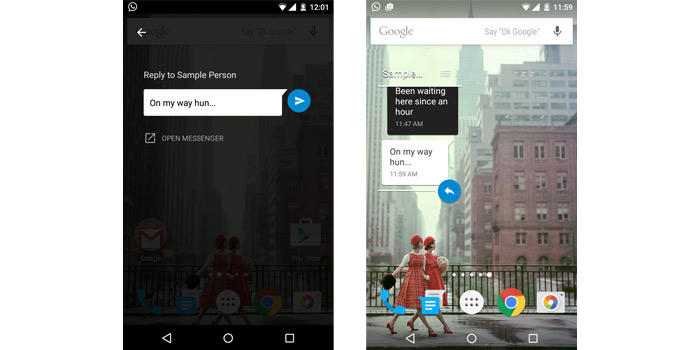 However, in the new quick reply feature of Messenger, there is no way see the what the incoming message is in case you forget what you are replaying to. There’s hence an ‘Open Messenger’ button which takes you right into the conversation through a single tap.

The other new addition to the application is a widget meant for single conversations. This one cleverly places conversation bubbles on your homescreen without obscuring it much. A blue reply button on this widget lets you jump right into the new quick reply feature to respond to a particular message.

Like we said, the updated Messenger app is rolling out through the Google Play store right now, but those eager to try it out can download its APK which has been uploaded by Android Police.