Google is trying hard to make something out of Hangouts, but it’s seemingly not getting anywhere. The messaging service is being triumphed by a number of other utilities that are dominating the app space right now. In a bid to get some respite, the company has now launched a standalone website.

This is from where you’ll be able to access all your chats and perform all major functions of Hangouts while in the confines of your browser. But wait! Wasn’t this already possible through a Chrome extension, Gmail, Inbox, the Chrome app, Google+ and what not?

Why then has Google felt the need to give it some more web presence is a big question. Perhaps it’s the similar route that was taken recently by rivals Facebook Messenger and WhatsApp that is behind this big jump. 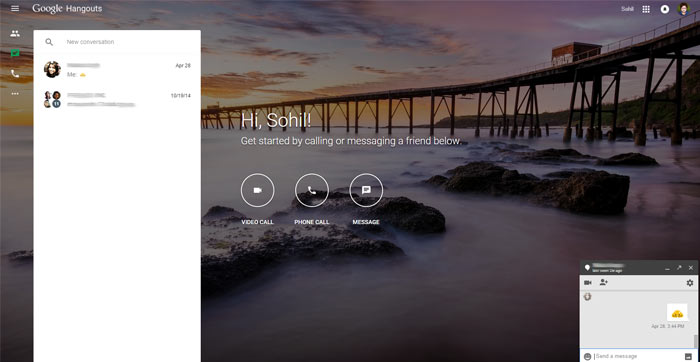 Anyway, the Hangouts website provides you with a synced view of all your chats, voice calls and video calls, and even lets you trigger them of course. What’s really unbelievable is that despite developing a separate website for the service, Google has for some ungodly reason retained the tiny pop-up chat boxes that stem from the bottom of the screen when you wish to chat with someone.

Really, what year is it Google? One would at least expect formatted windows or a more integrated design with the Contacts box. The pop-up window design has been around since the launch of Google Talk 9 years ago. This would have been a great opportunity for Google to revamp the design, but it has chosen otherwise.

If you’re inclined towards trying out the new Google Hangouts standalone website, you can visit this link. A cool feature is that it cycles its background images regularly to showcase some really stunning photographs from Google+.