Google’s GPhone to be unveiled by 2008; Phone Prototype being shown to Manufacturers 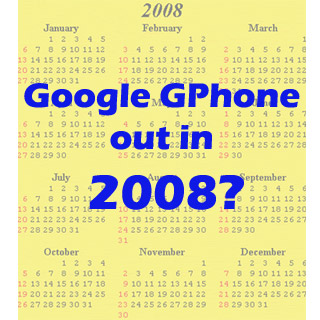 Search engine giant Google is in the works of coming up with a mobile phone by early 2008, through which its users will be able to surf the web while on-the-move.

According to the Telegraph, Google’s is crossing fingers that it’s ‘GPhone” will be as well-known as Apple’s iPhone, which was launched in the US in June amidst a lot of hype.

Several Google services such as search engine, e-mail and interactive maps, will be loaded on to the forthcoming GPhone.

Google services, such as its search engine, e-mail and interactive maps, will be loaded on to the phone. It is thought Google will derive its revenue from the lucrative mobile advertising market.

At present, the Mountain View, California-based company is showing the prototype to mobile phone manufacturers and network operators while it is polishing up technical specifications to provide a mobile web browsing experience that is superior to current software, stated a report in Wall Street Journal. Google has apparently penned a deal with a Taiwanese firm to design the phone. The Journal further suggests that Google intends offering free mobile subscriptions, subsidized by ads in search results and software applications.

The Telegraph cited Eric Schmidt, Google’s CEO, stating that mobile phone adverts are “twice as profitable or more than non-mobile phone ads because they are more personal”. Research a telecoms analyst; has predicted that the market for mobile advertising will be worth over $5.4 billion a year in the next four years, i.e., by 2011.

One manufacturer believes that the phone could be launched in Europe at a 3GSM Conference early in 2008.
Well all we can do is wait and watch!