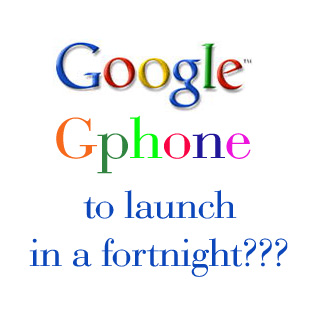 We all were aware that the Google Phone AKA Gphone was on its way anytime in 2008. But what’s come as quite a startling news is that the device will launch in a fortnight’s time and apparently the company has already began talks with service providers in India for an exclusive launch on one of their networks, according to Rediff.

Bhart Airtel and Vodafone Essar are the prospective companies that may perhaps see the Gphone hitting on their networks.

Further on, reportedly a simultaneous release in the US and Europe is also in the works and announcements would be sent to media firms in India and around the globe. However sources that have given this piece of information also stated that the US regulatory approval, which is expected soon, is the only obstacle that Google is waiting to cross. Google plans to invest $7-8 billion for its global telephony venture.

According to reports, in India, there are talks with the local providers to provide data and content and platforms such as Instant Messaging (IM) and Search functions. But all the same, this bit of information is not yet confirmed.

A Google spokes stated, “We don’t comment on market rumour or speculation. However, Google is committed to providing users with access to the world’s information, and mobile becomes more important to those efforts every day. We’re collaborating with partners worldwide to bring Google search and applications to mobile users everywhere. However, we have nothing to announce at this time.”

Some days ago, Google had apparently shown a Google Phone prototype to mobile phone operators in the US, and was said to be in talks with handset makers.

According to Rediff.com Google only needs FCC approval and it’s ready for launch. Now it’s certainly not ‘only’ an FCC approval, cause that but has a lot of importance to it for sure.

The Apple iPhone is expected to launch in India in early 2008, or maybe even as early as 2007-end. In that case, the Gphone could perhaps pose a cut throat competition to Apple’s device.