Google working on digital screens you can tear up

Screen technology has already come to the point where displays can be bent or rolled, as shown off by LG’s rollable screen just a few months ago. Google has now decided to go one step further and actually allow people to tear off displays just like normal paper.

This cool new concept comes courtesy a Google patent filing. The basic idea underlying it is relatively straightforward. There’s a main display which is composed of multiple connected parts and each segment can work independently of the other. Tearing a scrap automatically triggers a transfer of information.

To illustrate its point, Google gave the example of a lost dog poster. The primary screen is made up of the picture of a dog and the word dog is divided into three splittable parts. When ripped, the scrap changes to a smaller image of the dog and a phone number automatically, while the word dog gets shifted to the main poster above. 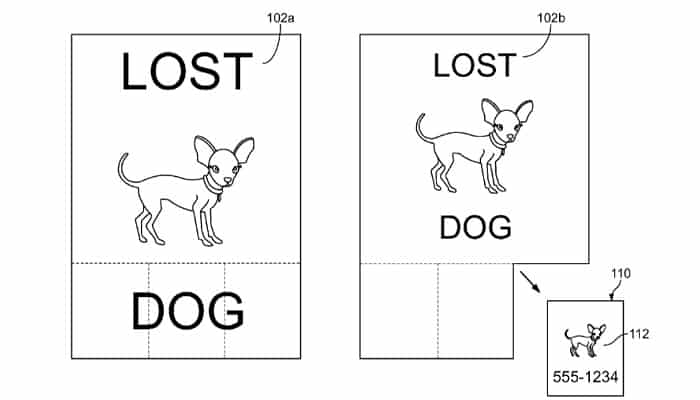 That’s not the only real-life scenario which Google has conjured up. The patent also talks about using the adaptable display to advertise a product in a shop. Consumers could tear away a portion of the screen to grab a coupon. The company even mentions reattaching scraps to the original panel it was taken away from, combining them together, or fixing them to a completely new display.

Google goes on to suggest the different kinds of materials the new tearable screens could be made from. Going back to the first example, the main lost dog section may be manufactured out of a bright OLED screen in order to catch a person’s attention. On the other hand, the detachable portions could be composed of an e-ink display which don’t require a processor to display content.

Keep in mind that Google patents don’t always see the light of day. We’ll keep you updated if tearable screens become a reality in the future.