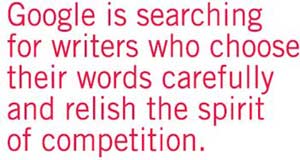 This is what the Google India announcement states:

If you have a clear, concise style and can use words to inform and persuade consumers, we would like to hear from you. We are looking for exceptional individuals to join the Google team in India, and we’re organising a contest – the Google Wordmasters Challenge – to find and reward India’s best writers. The contest will be judged by a panel of respected professional writers.

“The contest will also enable the participants to meet members of our team and explore our dynamic and exciting work environment,” continued Gilbert.

The contest is scheduled to take place on September 30, 2006 across 10 cities in India, which include Ahmedabad, Bangalore, Chennai, Cochin, Delhi, Hyderabad, Indore, Kolkata, Mumbai and Pune. The contest is open to all participants nationally and the deadline for registrations for Google Wordmasters is September 25, 2006.

Participants from the above mentioned 10 locations will battle it out to qualify for the final positions. What’s more…all the winners will be invited to a one-day tour of the Google office. Though the contest does not have an upper age limit, all participants must be graduates.

And hurry. The contest is open only to the first 300 participants, so the sooner you enter, the better.