Google has brought out Views, yet another fresh product from the foundries of the search engine giant, and it provides easy access to photo spheres made possible by the Android 4.2 OS update. This new community-based addition to the Google Maps service allows users to upload 360 degree panoramas clicked at respective locations for others around the world to see. If you upload a photo sphere through the company’s social networking site or directly from your device, your profile is automatically created on the new service.

Product manager Evan Rapoport, has disclosed by means of a blog post that those who share these photo spheres will even be able to see them from their own Views user page which will grant them easy access to a grid of their own photo spheres. With one single click on those, you will be allowed to blow them up into actual 360 degree shots that can be scrolled through on all sides in order to get a much clearer look at the location. 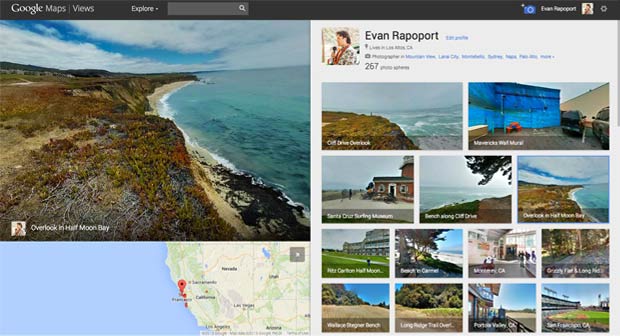 Moreover, the Views service even allows the sharing of panoramic shots clicked using DSLR cameras. Photo sphere was introduced by the company through the 4.2 version of its Android OS, and is hence available on all the devices which employ the software or its later version. Before this introduction, the company’s social networking site was the only one to feature support for the sharing of such photo spheres.

Like we said, Views is now available to be explored on the Maps service offered by the tech giant.