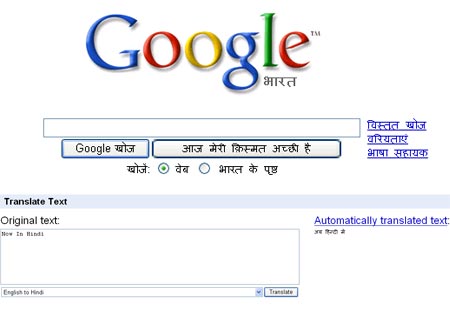 The Google Translator, which is popular for its translation service introduces a new language to its choice of language options. Hindi has been added to the Google translator application over the internet.

Out of the total Indian population, only 13% are English literate, so this demands the need of a translator feature that can convert the desired text or web page to Hindi. The internet seems to be spreading its wings wide open to the remote locations of India and the other parts of the world, so the requirement of a multi-lingual application has become a must.

With the introduction of the new language, one can even translate text to Hindi and post the same as a scrap to their buddies on the very popular social networking site Orkut. You can easily access the site http://www.google.com/translate_t and punch in the text you wish to translate and show off your language proudly over the internet by breaking away the language barriers.