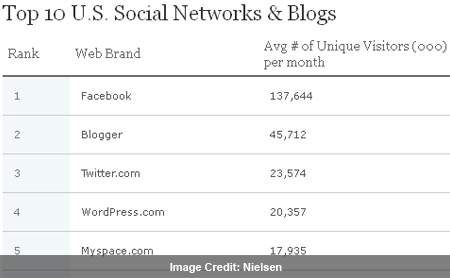 Though it may sound a bit confusing to anyone who’s been reading comScore’s newest report, Nielsen has named Apple as the top handset manufacturer. And Google makes it as the leading web brand, while Facebook triumphs over other social networks. All of this has been put together by the market research company in a bid to disclose the top online destinations, social media sites and smartphone devices for 2011.

According to data gathered together between August and October of this year, Apple, HTC, RIM, Samsung and Motorola figure among the most popular smartphone device manufacturers in the U.S. The Cupertino-based company apparently took 29% of the market share, followed by HTC with 21% and RIM with 17%. Samsung and Motorola each claimed 11% of the same, according to Nielsen. To put it more clearly, the findings can be read as ‘29% of mobile phone owners who recently bought a new smartphone laid hands on one from Apple’ and so on.

In terms of web brands, Google took the lead to nobody’s surprise. This was followed by Facebook, Yahoo! and MSN/Windows Live/Bing. Interestingly, YouTube ranked fifth with 106,692 unique visitors per month at an average. These numbers are based on data collected from January to October 2011, Home and Work Computers. Listed among the top three social networks and blogs were Facebook, Blogger and Twitter. WordPress took the fourth place and Myspace happened to be hanging around the fifth place. 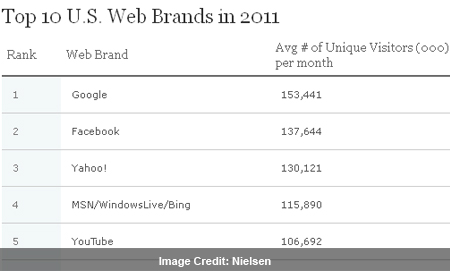 For those wondering about how Google+ fared in these wars, the social networking suite was marked in the eighth spot with 8,207 unique visitors per month at an average. Obliging us with the top online destinations for video watching, Nielsen says that YouTube came in first with an average of 111,152 unique video viewers a month. This was followed by Vevo and Facebook in second and third places, respectively.

For all those who are sticklers for details, Nielsen has a Q3 2011 Social Media Report as well as a Mobile Media Report for 2011 to show.