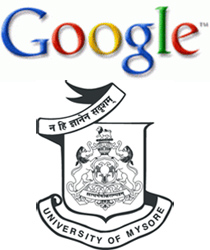 Around 8,00,000 books as well as manuscripts from the Mysore University in Karnataka, India will soon be digitized by Google.

The Mysore University library has around 100,000 manuscripts that are written both on paper as well as palm leaves. These would include India’s first political treatise, the ‘Arthashastra’ written in the 4th century BC by Kautilya.

J.Shashidhara Prasad, Vice Chancellor of Mysore University commented on the initiative and said that this is an effort to restore and preserve this rich cultural heritage for effective dissemination of knowledge.

“Many manuscripts on ayurveda, mathematics, medicine, science, astrology and economy including ‘Arthasastra’ and several paper manuscripts of the Wodeyar dynasty of Mysore will be digitized first,” Prasad, said.

Prasad also said that the digitized versions of manuscripts would be patented depending on exclusivity, and would be printed, once the digitization work was over.

Google will be digitising these manuscripts as well as 700,000 other books free-of-cost. The idea behind digitising for free is to get free links to these materials once the necessary patenting is complete.

Google will also provide expertise, software, and manpower for the digitization work. Whereas, Mysore University is training some of its select Physics students to help in the digitization process.

Though no time spell has been given by the university on the completion of the project, once complete, they said they would allow students, scholars, and historians from all over the country to access this vast knowledge base. Asked why Google is interested to do the job for free, the vice chancellor said the company would get free link for these materials once the necessary patent right is done.

Prasad, who is also a physicist, said that selected physics students of his university are also getting trained to help in the digitalization process.

Elaborating on its utility, Prasad said they would allow students, scholars and historians from all over the country to access the knowledge base.