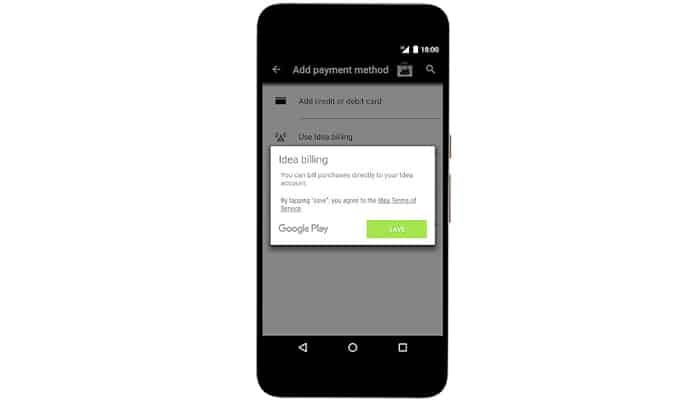 Google Play Store users in India have only had the choice to pay for apps through debit cards, credit cards or prepaid vouchers so far. This is all set to change in a major way with the announcement that the brand has gone ahead and launched carrier billing in association with Idea Cellular.

From now onwards, Idea subscribers can buy anything in the Google Play Store directly from their Idea account. This isn’t just restricted to apps, with even movies, books and games up for sale through this method. Even in-app purchases are covered under the new partnership.

The service does come at a slight cost though. For instance, a convenience charge of Rs 1.50 is applicable on buying something worth Rs 10. It’s now up to the people to decide whether this extra amount is worth it for the usefulness of just letting Idea handle the bills.

In a blog post, Google clarified that prepaid users who buy apps through carrier billing will see the amount deducted from their balance. Meanwhile, postpaid patrons are set to get a separate section in their bills headed Google Play purchases to keep track of how much they’ve spent.

Making a purchase from the Play Store via the new scheme is simple. All a person has to do is choose Use Idea billing under payment method and it’ll get activated. The move is a huge step forward for the brand. While Android currently dominates the mobile OS ecosystem in India, a majority of its user base don’t own a credit or debit card.

The one thing that is common between all these smartphone users is a telecom operator. It makes sense in that light to move forward with carrier billing. Google will likely tie up with other network brands in the future to further its dominance in the app world.