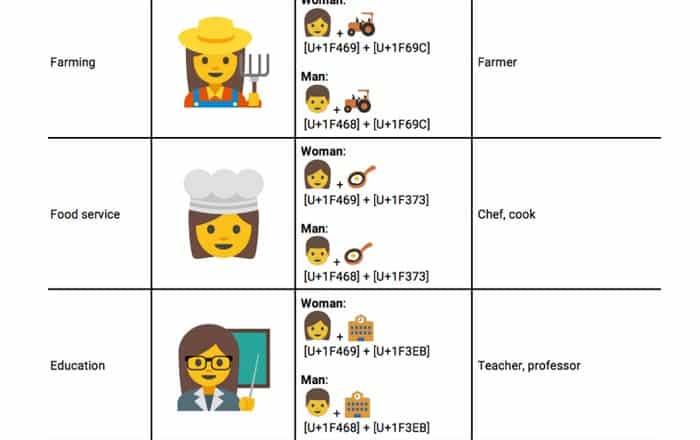 A set of thirteen new emoji depicting professional women has been created by a team of Google employees, which wishes to see some gender equality in this department. Before making this presentation public, these designers have already presented the concept to the Unicode Consortium which approves and standardizes emoji for use in software.

The Google employees have said that their presentation depicts a new range of professions to highlight the diversity of women’s careers and empower girls everywhere. In the current emoji setup, everyone from a police to a construction worker has been shown to be a man, with the female emoji having been limited to depicting beauty-centric roles.

The newly proposed emoji are not looking solely for female representation. In fact, they will be applied to men and women both. These emoji will range from different professions including business, healthcare, science, education, technology, industry, farming, food service and music.

But the method suggested by the Google team for getting these emoji posted will be a bit different. If someone wishes to post a farmer emoji, they will have to choose a standard male or female emoji first and then follow it up with a tractor emoji. This way they can have either a male or a female farmer. This sounds like a good idea, but it’s going to be quite a task to have people learn how to use it.

The four people at Google responsible for this have expressed that they would like to get these new emoji standardized by the end of 2016. That wouldn’t be a difficult job moreover, since one of these four members happens to be the co-founder and president of the Unicode Consortium.