Google Supports Yahoo to do away with Microsoft’s Bid Attempt 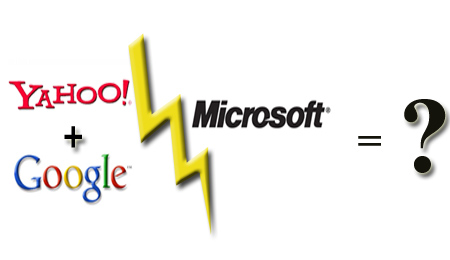 Last week’s big news saw Microsoft requesting an acquisition for Yahoo in a bid to bring rival Google down. Ever since, the Internet has been abound with speculations of what the result would be if the marriage of these two power houses were to take place. Now, reports from sources close to the developments say that Yahoo could also consider an alliance with Google to fend off the $44 billion takeover proposal by Microsoft. Why? Well, read on to find out.

Search giant Yahoo is considering a revival of talks with Google on an alliance. Reports have said that several media, technology and financial companies are currently in contact with Yahoo. However, this in itself did not point to any alternative bid.

Yahoo executives have said that no decision has been taken so far on the proposals for consolidation.

“We want to emphasize that absolutely no decisions have been made- and, despite what some people have tried to suggest, there’s certainly no integration process underway,” Yahoo said in a memo addressed to its employees.

However, analysts are hell bent on Google being the winner in the bidding war. It is common knowledge that Google would love to see the Yahoo-Microsoft alliance plan thwarted.

Here is what Google’s chief legal officer David Drummond said in a post on Google’s official blog, “Microsoft’s hostile bid for Yahoo raises troubling questions. This is about more than simply a financial transaction, one company taking over another. It’s about preserving the underlying principles of the Internet: openness and innovation.”

Now, this blog post definitely points to the direction that Google’s believes that the possible deal between Microsoft and Yahoo would be bad for the Internet on the whole.

From all the reports and analysis, it seems to be clear that Microsoft is mainly interested in Yahoo to challenge Google in the search engine as well as in the Internet advertising market.

Now, if Microsoft’s plan backfires and the tables were to turn with Google and Yahoo hooking up instead of Microsoft and Yahoo, then Microsoft is sure to be in much bigger trouble than ever! Till then, we’ll just wait and watch with bated breath.