Google Hangouts has fallen by the wayside in recent years, with very little to differentiate it from other chat services. It looks like the company itself has realized this and overhauled it from a consumer-leaning tool to a enterprise-focused one.

Google’s decided that the way to do this is to split Hangouts into two apps called Hangouts Meet and Hangouts Chat. The former is meant for video conferences and the latter as a corporate communication tool for teams to chat and share projects.

Google is trying to sell Hangouts Meet as a simplified and light video conferencing tool with zero frills, downloads, plugins, or accounts. Meetings begin with a single shared link which can be accessed via Calendar, an email invite, and an ad-hoc share. Up to 30 participants can join in, whether they’re in a conference room, on a laptop, or on their smartphone.

Interestingly, G Suite Enterprise users will get a dedicated dial-in phone number for each meeting. This could prove useful in cases where a person can’t go online. Meet further integrates directly into G Suite so information about a conference is automatically present in Calendar. 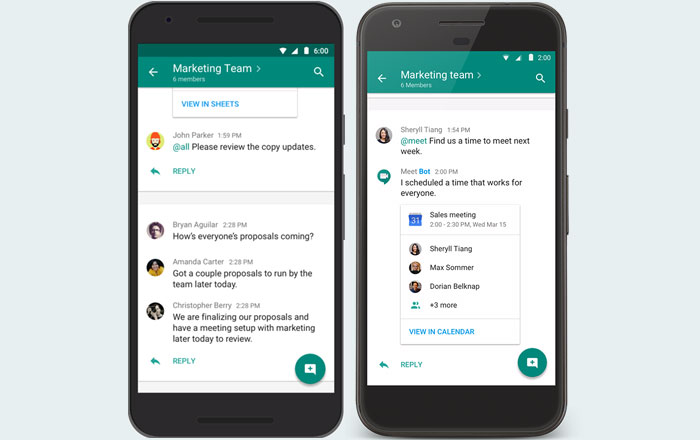 As for Hangouts Chat, Google is clearly grooming it to take on competitors like Slack and Microsoft Teams head-on. Like the others, the app provides a space for teams to talk shop and get work done. The advantage here is the direct access to things like Docs and Drive.

Google’s also come up with an intelligent bot called @meet. The AI tool has been built on top of Hangouts and uses natural language processing and machine learning. An individual could ask it to schedule a meeting and it would accordingly find a free spot for all team members.

Hangouts Meet is now live and will roll out to all G Suite customers over the course of the next couple of weeks. They’ll have to apply to try out Hangouts Chat through Google’s Early Adopter Program.