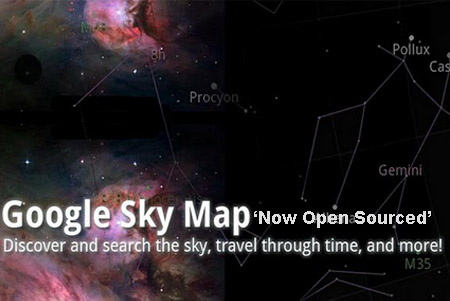 In process of renewing old resolutions and closing down a few more services, a certain Mountain View search giant has recently announced that the Google Sky Map application for the Android platform will now be contributed to the open source community. Developers can acquire a copy of the code through the Google Code website.

In collaboration with the Carnegie Mellon University, Google states that the application will be further improved through a series of projects carried out by students enrolled with the institute. Another reason behind making the app open sourced could be intended towards allowing other developers to further enhance the code and create augmented reality tools of their own.

A post on the official Google Research blog, stated, “Today, we are delighted to announce that we are going to share Sky Map in a different way: we are donating Sky Map to the community. We are collaborating with Carnegie Mellon University in an exciting partnership that will see further development of Sky Map as a series of student projects. Sky Map’s development will now be driven by the students, with Google engineers remaining closely involved as advisors.”

Developed back in May 2009, the application is said to have been created by around half a dozen Googlers to demonstrate the capabilities of the sensors that are equipped within the first generation of Android-based smartphones. The company has also reported that the app has been downloaded over 20 million times since its launch.