The Google Search Android app which houses the much loved Google Now features has been updated to include two fresh commands for those who can’t live without the cameras on their devices. Two new voice commands have been thrust into the app in the form of ‘Take a Picture’ and ‘Take a Video.’

The names of the commands are pretty self explanatory, so there’s no need to tell you what they’re meant for. For Nexus and Google Play Edition devices as well as the Moto X and Verizon Droid phones, these commands will simply work without you having to touch your phones. All you need to do is say ‘Ok Google, take a picture’ and they will do the needful. 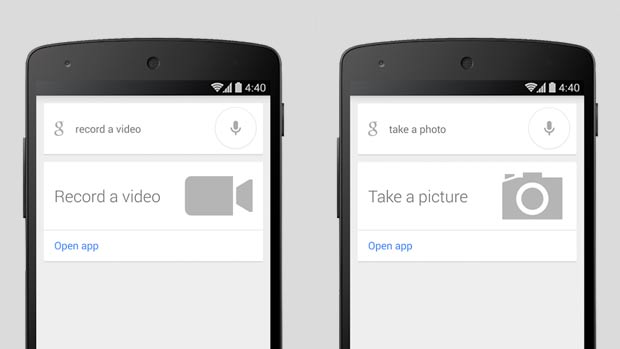 However, on other devices featuring Now, you’ll need to tap the microphone icon in the Google Search app prior to giving out the command. It’s being reported that devices running Android 4.4 KitKat as well as those featuring Android 4.3 Jelly Bean support the new additions.

This Google Search app update is live now on the Play store, and can be downloaded on compatible Android devices either voluntarily or automatically. Following the update of course, anytime you’re in a situation which is asking for a quick photograph or a video, you’ll be able to capture them using the new voice commands.