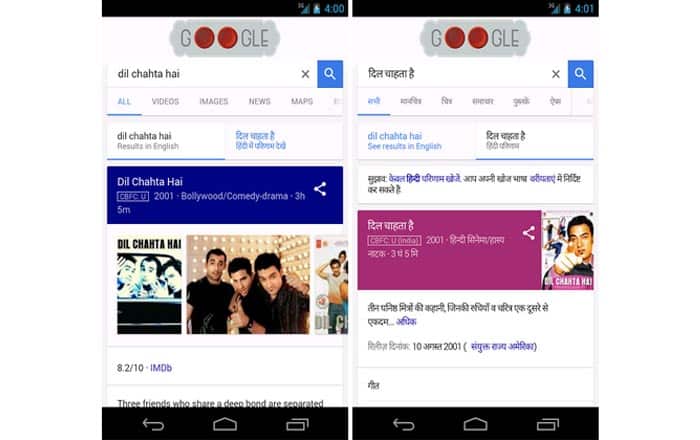 Google has come up with a pretty innovative solution for Indians who would like to see their search results in two languages. It’s rolled out a new feature for mobile users which adds two tabs beneath the search bar, one for Hindi and the other for English.

As Google puts it, Indians should be able to search for stuff online the same way they move between multiple languages in real life depending on the situation or audience. The new tab search feature is a way to make this possible. For instance, if you type in the word ‘samachar’ in English, you can now choose to see your results in Hindi or English.

This fresh addition to Google Search isn’t just restricted to single words like samachar, with the brand also adding support for longer queries like ‘Dhoni ka janam din kab hai?’ and Bollywood-related questions pertaining to movies like ‘Dil Chahta Hai.’ It’s a neat tool which could help the company appeal to its Indian users.

Google says the tab search feature is now rolling out to states with significant Hindi-speaking populations namely Himachal Pradesh, Chattisgarh, Madhya Pradesh, Uttarakhand, West Bengal, Haryana, Bihar, Delhi, Jharkhand, and Rajasthan. It’ll be accessible through both iOS and Android via the brand’s Search app and most browsers except for UCBrowser and Opera Mini.

Google has recently been hard at work trying to woo Indians with unique additions to Search. It recently unveiled a fresh set of tools to cater to people searching for Bollywood-related queries, which should tie in nicely with the tab search feature’s abilities to answer such questions in Hindi.