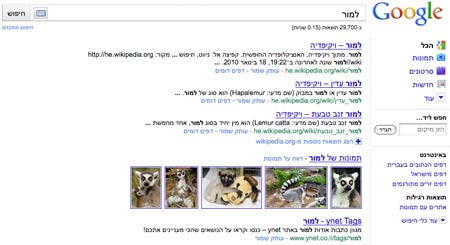 Whether it’s looking for a business model or accessing some ancient Egyptian pyramid details for a school project, Google Search is undoubtedly an inevitable part of our lifestyles. The official Google blog has just refreshed the search engine for users to easily find their favorite music videos and effortlessly access search panels in other languages. A new World IPv6 Day for swift and relevant search results has also been announced.

When searching for music videos of a particular artist, Google will display popular clips in a more organized manner. These videos will be shown with clear text informing users about its length, the album name and the year in which it was published. This unique feature scans the complete web for video content and automatically puts up the best sources for each song. Algorithm calculation takes place within seconds as the top-most links are displayed for users.

This week saw an expansion of Google’s search tools panel to Arabic, Farsi and Hebrew. Since these languages are read right-to-left, concerned users can now access a dynamic set of search tools on the right. Users speaking the mentioned languages can simply refine their search by content type or date and access special views like the Wonder Wheel and Timeline. Truly placed on the right, this left-hand panel consists of all important search tools.

Another growing concern which is attempted to be solved by Google is the Internet bubble burst with limited address space. A solution to this issue is IPv6. Although search over IPv6 is already offered by Google, only 0.2 percent of Internet users reportedly have IPv6 connectivity. Thus, Google along with the Internet Society and other major websites have announced World IPv7 Day on June 8, 2011. On this day, all companies will facilitate IPv6 on their services, including Google Search, for 24 hours to motivate its use further ahead.

Last week, Google had included a feature for hacked site notification during search which warned users about which websites may have been compromised, spammed or defaced. With this week’s features, there seems to be no stopping the enhancements to Google Search being introduced every now and then.