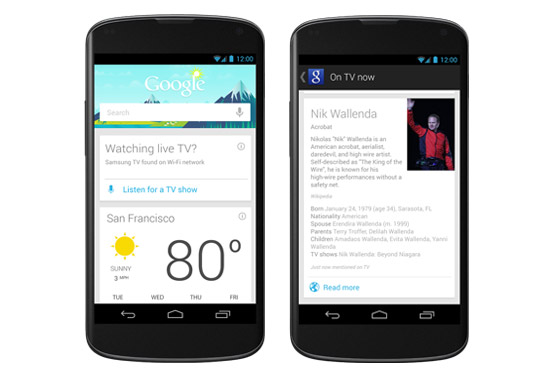 An update for the Google Search application on Android has been issued by the search engine giant, blessing the service with new TV cards, a fresh voice action and an offer redemption feature. This upgrade to the native search application which also doubles up as Google Now for devices employing the Jelly Bean OS can be snapped up now through the Play store.

The TV feature which we’ve mentioned above is a US-exclusive trait, so don’t expect to get to use it if you’re not an American resident. What this new Google Search addition does is that it bonds with users’ internet-connected TVs, to unlock added information about what they’re viewing.

However, this works only when their Android devices are on the same network that their TVs are on. A prompt with a ‘Listen for a TV show’ button will be displayed by the app, clicking on which will enable the app to display various bits of information regarding the content that’s running on the TV.

The Offers card is another interesting addition that has made its way to the Google Search update. It allows shopaholics to save details regarding particular offers which stores are tendering. Once that’s done, whenever they pass from near the stores in question they will be issued reminders about the saved offers by the app.

Furthermore, a new voice action that makes its way into the Google Search Android update gives it the ability to play music from the device or the Play store. That’s not all; voice action tips have also been added to the whole package by the developers over at Mountain View.

Although the Search application is available on Android smartphones and tablets, these above-mentioned G Now features were added only to 4.1 Jelly Bean OS gadgets through an update recently. Devices bearing the 4.2 OS of course hold these traits natively.