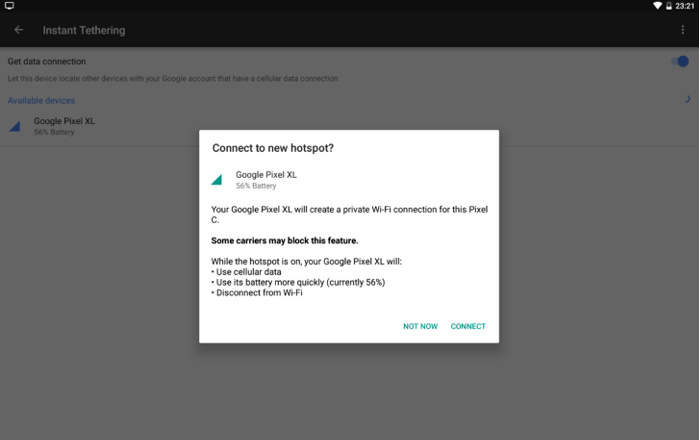 Google’s rolling out a useful feature called Instant Tethering to make connecting to your Android phone’s hotspot a bit more convenient. While the previous process required numerous steps to set up, the new one is considerably faster.

Instant Tethering is being released slowly as part of Google Play Services 10.2 and likely won’t reach everyone immediately. Android Police reports that the tool will be making its debut on Nexus and Pixel devices with Android 7.1.1 Nougat running in their veins first.

For now, the Nexus 9 and Pixel C are only supported as clients. This means that the two can be linked to a compatible handset even if it’s on Marshmallow. Smartphones like the Pixel XL are eligible to serve as hotspots. Other than joining together phones and tablets, the feature can also tie two of the former if one loses its data.

Also Read: Google Maps now tells you how crowded parking is at your destination

As for how Instant Tethering exactly works, the ability basically connects all the devices which share your Google account. It functions almost automatically to make sure you stay online constantly even in case of network drops, asking if you want to tether to your phone when the latter occurs without any additional steps.

Instant Tethering uses Bluetooth to power the connection and additionally shows you the battery level of your hotspot-lending gadget. The feature will probably get wider exposure as its being tested. It seems to have a server-side component to it, which means you probably won’t see it immediately after installing Play Services.

You can check if you’ve gotten Instant Tethering by heading to your phone’s main system settings and tapping on the Google menu. If you haven’t, restarting your handset may trigger its arrival.