A new PDF Viewer app has just been released by Google through the Play store, while the search giant has also launched an update for its all-important Drive app. The newly released application has a pretty narrow audience however.

That’s because the Google Drive app which is present on most Android phones and tablets possesses the ability to open PDF documents by itself. So, all those who use the said utility need not download the new one. 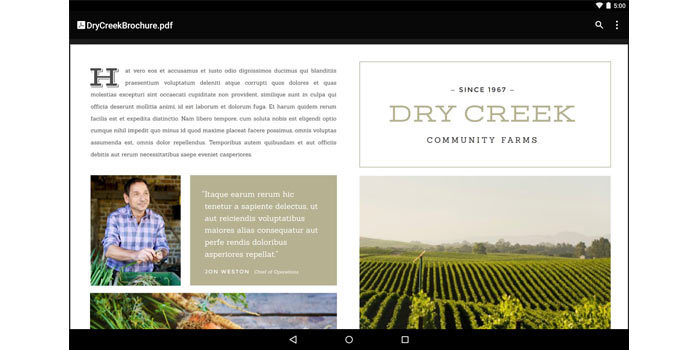 Google has said that PDF Viewer is hence targeted towards Android for Work users. Employers who do not want their employees to receive access to Google Drive but still wish to provide a PDF viewing tool can make the most of this app. And although it’s available to download for everyone, it’s of no use for those who have the Drive app installed on their devices.

Coming to the update that has been released for the Drive application, it brings with it the neat ability to drag and drop files. Moreover, Google has also equipped this new version of its cloud storage app with a changed navigation menu. It has been released already, and can be grabbed now through the Play store.

Also Read: Google shows off Android for Work program so that you can BYOD to the office

In other Google news, it was learned today that Huawei has been chosen by the company to be its hardware partner for the next-gen Nexus project. While no concrete evidence is available on this matter, this revelation has come from a pretty reputable source in China.

Here’s the Play store link to the new Google PDF View app if you’re interested in giving it a go.

Facebook
Twitter
Pinterest
Linkedin
ReddIt
Tumblr
Flip
Previous article
YouTube’s Android version lets you edit your videos before you upload them
Next article
Beware: Those invites to try out calling on WhatsApp are a scam